What is a Drive Pulley?

Posted by on 10/22/2018 to Guides
You know the thing you're holding is a v-groove drive pulley because that's what your owner manual says. But what is a drive pulley, anyway?
A drive pulley is a pulley that is attached to a power source, that when in use puts force on a belt (or cable or chain). The belt is connected to the object being driven, which will then spin. This is a type of power transmission.
All by themselves, they won't give you the drive to wake up early and use your snowblower and clear the driveway, but used with other components, they'll sure make the job easier! 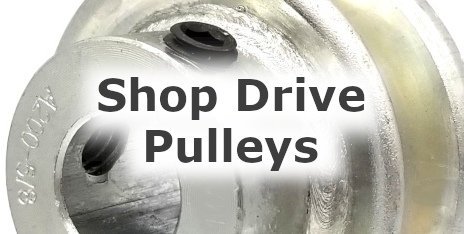 What is a drive pulley made of?

Drive pulleys can be made of any hard/sturdy material - diecast, steel, and cast iron are the most popular choices.

All drive pulleys must have two components: 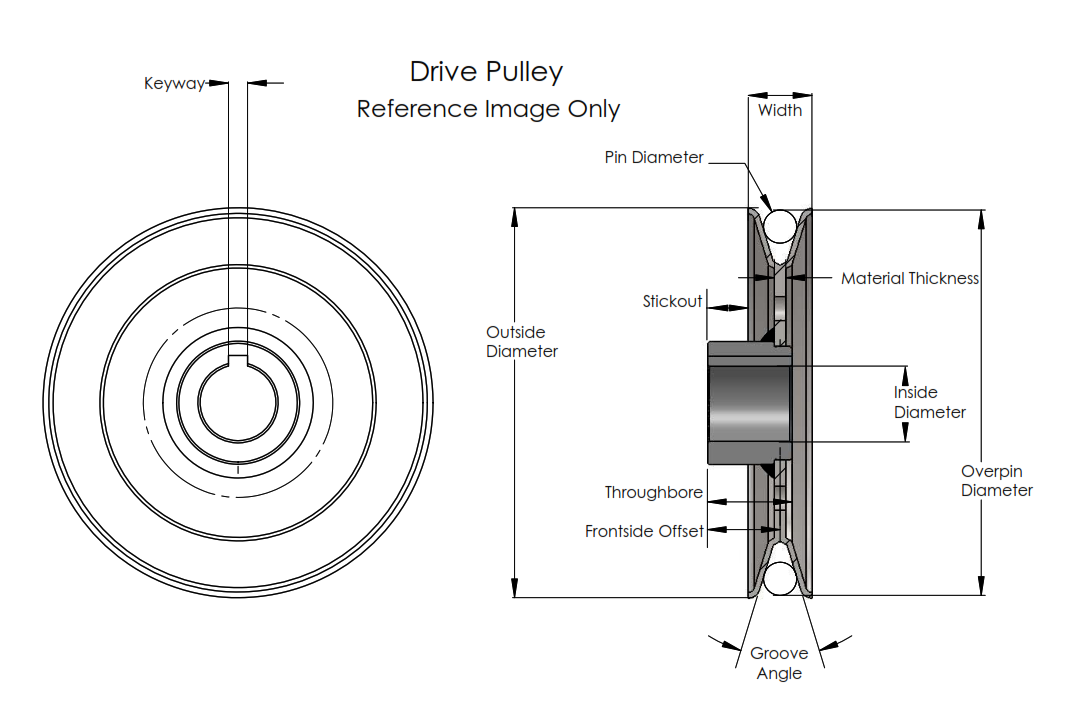 A typical configuration for a steel V-groove drive pulley

Not sure what some of the terms on the diagram mean? Here are some helpful definitions:

Frontside Offset: The width from the center of the product to the front edge of the hub, bearing, or bore adapter.
Groove Angle: The angle of the v-groove. This is largely governed by the diameter of the pulley but can affect how deep in the groove your belt will ride.
Inside Diameter: The distance across the center hole, or bore, of the product. This dimension should match the diameter of your shaft or bolt.
Keyway: The width of the key used to anchor the pulley to a shaft. A negative keyway means this has an integral keyway, so no separate key will be needed to anchor the pulley.
Outside Diameter: The distance across the circle of the product, from outside edge to outside edge.
Overpin Diameter: An engineering dimension used to represent belt effective diameter. Cylinders or "pins" are placed at the top and bottom of the pulley's v-groove, the measurement is taken from the top of the upper pin to the bottom of the lower pin.
Pin Diameter: Diameter of the cylinder used to determine the belt with the best fit in v-belt drive and idler pulleys. Other belts may work with the pulley, but the fit into the v-groove will be different.

Get some tips on how to measure a drive pulley?

Okay, so now you see what some of our pulleys look like, and what they're made of, but... why? First, and I'm really sorry about this, but we're going to need to talk about science.

What does a drive pulley do?
It sounds like an easy question, but in order to answer this, we need to all be on the same page with some words and phrases that get thrown around all the time. There's no math, though, I promise!

Force: strength or effort.
Dropping a piece of paper onto the floor has very little force on the floor, dropping a couch has quite a bit.

Energy: Work stored, and work used.
Eat lunch and then take a nap on a couch. You’re storing the energy you just put into your body. Now, pick up that couch and move it into another room. You’ve just worked pretty hard and used energy.

Torque: The amount of force in a system. For our purposes, more torque means a heavier object can be moved than with less torque.
A race car can move very fast, but it can’t tow very much at all, while a dump truck has can tow quite a lot – it has more torque than the race car.
Both vehicles can move slowly together, but the racecar will be stuck in its tracks with a heavy load. The dump truck can move a very heavy load but certainly won’t be winning Daytona any time soon.

Simple Machine: A tool or method that makes a single task require less work.
Pick up one side of a large and heavy object like a couch[1] and drag it across the room. Much easier than trying to pick the whole thing up, right? That’s because you made an inclined plane! The higher you pick up one end, the easier it is to move, but you will have to move it just a little bit farther.[2]

Power transmission: Moving energy (stored work) from one place to another, rather than moving objects.
If you ram a couch into a coffee table, you have moved the energy your body used to move the couch, into that coffee table.

Drive Pulley: A pulley attached to a source of power. This could be a motor, engine, or even a hand crank.

Driven Pulley: A pulley that is not attached to a source of power, but is connected to the [drive pulley] by a belt.

Pulleys in power transmission achieve mechanical advantage when the drive pulley has a different diameter than the driven pulley.

In other words, Pulleys that are moving energy from one place to another can change the speed and strength by being different sizes.

In a basic two-pulley system there are three possible options:

Some common places to see drive pulleys include:

How about that? Do you feel driven to learn more now? Check out these other handy blog posts!

Questions? Complaints about broken couches? Let us know in the comments!

[1] If the couch had wheels, you’ve just tripled your work and probably broken off some legs, so get another couch and try again. Wheels are another great simple machine!

[2] Also, make sure you don’t flip it all the way over, that’s definitely going to make way more work than you want.